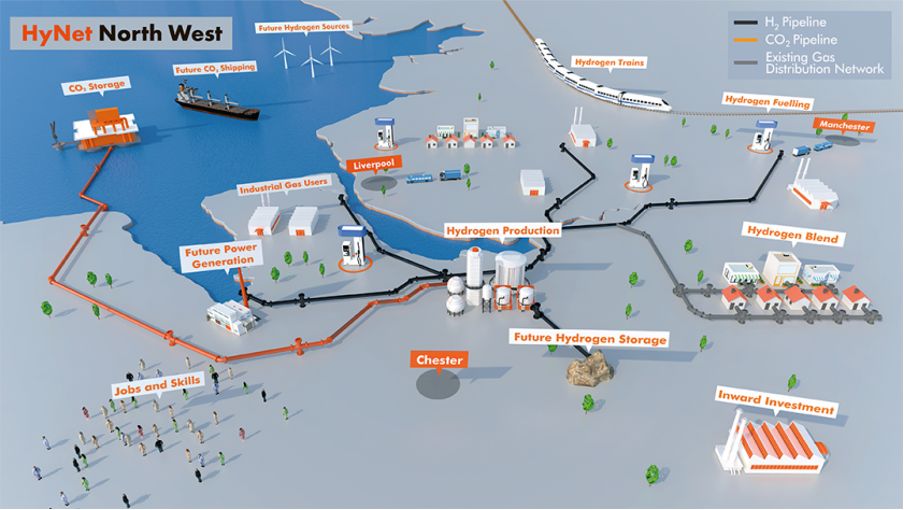 The UK government’s hydrogen strategy published in 2021, will focus on two planned clusters: HyNet in the northwest of England and the East Coast Cluster around the Humber and Teesside.

Much of the £240m ($290m) Net Zero Hydrogen Fund will help these two production projects get off the ground; a “hydrogen business model” will offer price support to low-carbon hydrogen producers.

The HyNet project is an ambitious scheme. It would help reduce CO2 emissions and build a plant to produce “blue” hydrogen from methane and could create or secure thousands of jobs over 30 years.

A location is likely to be around Ellesmere Port or Runcorn on the southern shore of the Mersey River where there’s lots of heavy industry.

Cadent plans to build a network of pipes from that plant to take hydrogen to some of the region’s biggest factories as process fuel instead of natural gas.

The carbon dioxide from the hydrogen plant would be pumped into the gas fields in the Irish Sea so it can be stored. The Liverpool Bay fields will soon be decommissioned but the existing rigs and pipelines could be reused for storing carbon dioxide.

5,000 jobs could be created by 2025 under the first phase of the plan, including the hydrogen plant, the pipeline and the offshore storage.

The North West Hydrogen Alliance has been formed to support this initiative. It brings together regional and national stakeholders, increasing public awareness of hydrogen. It is the largest regional membership body dedicated to hydrogen in the UK.

The ultimate scope of HyNet will include:

Repurposing the existing domestic gas network to hydrogen. Hydrogen can be blended with the natural gas used in homes, meaning 2m homes would see their carbon footprint cut.